Skip to content
The Stroganoff Palace, built in 1752, under the supervision of Italian architecture Francesco Bartolomeo Rastrelli, is a true masterpiece of Russian Baroque. The Stroganoff Palace was a center of cultural life in imperial St. Petersburg. No wonder that Restaurant “Russian Ampir” is settled in this historical building and nowadays it carries on a tradition of Russian culture. 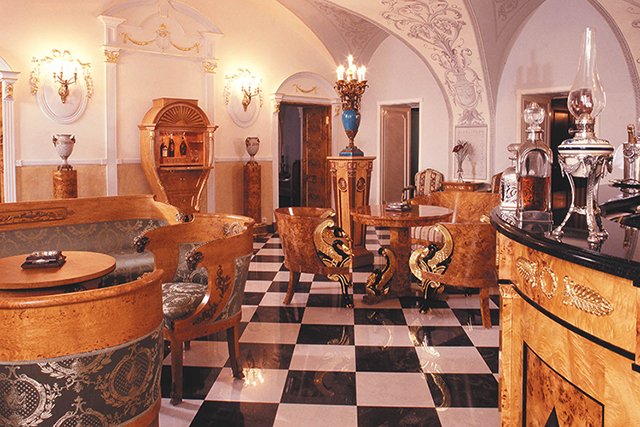 Alexander S. Stroganoff, The Count, was the first Chief of the National Library of Russia and The President of the Academy of Arts. A great art collection was represented in the palace, including masterpieces of Rembrandt, Antoon van Dyck, Robert, Reni as well as pieces of art of various famous sculptors.The Stroganoff’s library used to be the richest one in the Russian Empire. The Palace itself was famous for its grand balls, magnificent masquerades, operas.

Originally, Empire (in Russia “Ampir”) is the architectural style, it originated in and took its name from the rule of Napoleon I in the First French Empire, in the following, this architectural style was adopted and altered by Russian architects and got the name the Russian Empire. The interior decoration of our restaurant is regarded as a classic example of the Russian Empire style. Every room of the restaurant is full of antique forms and motifs, extant remains from the Classicism that was so popular during the reign of Louis XIV in France, gold finishing and decorations and furniture that was made of fine wood. There are five gorgeously restored dining halls in the restaurant and palace “Russian Ampir”. Even the most exacting audience will be fascinated by the view of tables served with 24 karat gold flatware, exclusive porcelain of 18th century, crystal wares encrusted with gold. A visit to restaurant “Russian Ampir” is a proper acquaintance with the cuisine of Russian aristocracy in the days of the imperial St. Petersburg. “Russian Ampir” cuisine rehearses the fancy of Imperial dinners by using gastronomic specialities. Many of recipes were recovered from the cookery book of the Imperial Winter Palace, among them were recipes of Stroganoff’s family.

Your choice fell on the restaurant “Russian Empire” for a wedding, anniversary or any other celebration?
Be sure – it will be remembered forever you exclusivity, luxury and pomp, peculiar a fashionable reception.